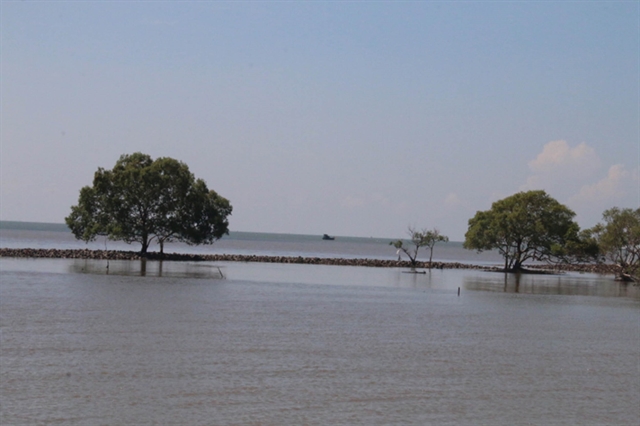 TIỀN GIANG – The Cửu Long (Mekong) Delta province of Tiền Giang has spent nearly VNĐ300 billion (US$12.9 million) to revet 7,581m of the Gò Công sea dyke with concrete to protect it from erosion.

The protective forest outside the section has either been lost or become too sparse to protect the dyke in the storm season.

The Gò Công dyke was small when it was built in 1930 to keep saltwater out of rice fields, Nguyễn Thiện Pháp, head of the province’s Irrigation and Flood and Storm Prevention and Control Sub-department, said.

Now more than 21km long, it has been upgraded several times to protect 35,000ha of farming lands along the Gò Công coast, which includes Gò Công Town, Gò Công Đông and Gò Công Tây districts and a part of Chợ Gạo District.

However, it has severely eroded and also gradually lost the protective forest belt due to climate change and other reasons.

To protect the dyke, authorities have revetted important dyke sections to protect it from strong waves and prevent erosion.

The province will revet another 74m that are severely eroded.

It has also implemented a project to develop mudflats for reforestation between the sea and the dyke since 2015 with 1,420m – long geotubes being built to protect the dyke.

The geotubes are made of permeable fabric and filled with sand.

The geotube dyke is used to prevent erosion caused by strong waves and create mudflats.

If the area between the dyke and sea is filled with sediments, the province will grow 17.82ha of mangrove forests there by 2020. – VNS